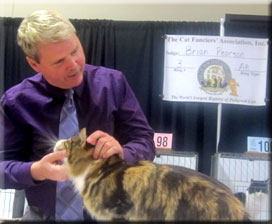 Midwest Region Going Above and Beyond Award – 2015

In April of this year, CFA had a near fatal experience happen to one of our judges. The judge who experienced a medical emergency was Wain Harding. Wain was on the April Denver show slate and arrived at the hotel in the middle of a medical emergency. I was there and watched it unfold from the hotel lobby. Fortunately, Wain survived and is make great strides to recover. When Wain arrived at the hotel he was wheeled to his room and would not or could not answer knocks at the door. But one person was more persistent and somehow managed to enter the room and come to Wain’s aide. Emergency medical help was called to the hotel and Wain was taken to the hospital. We don’t know with absolute certainty but it is highly likely if Wain had not gotten to the hospital when he did the morning may have bought a tragedy. One of Wain’s friends who was persistent in entering Wain’s room and stayed by his side may very well have saved his life. Tonight we would like to recognize that person in the hero category of friend in deed. A friend in need is a friend indeed and tonight we would like to honor our own Brian Pearson who came to Wain’s aid. Brian is the first ever Midwest Friend in Deed Award Winner.