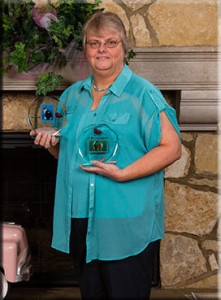 Cindy Willoughby has been working with animal rescue all of her adult life. She started volunteering with a local no-kill shelter after she got out of college. “When I started working part time at a Petcare (now Petco) store, I started going out to our local animal control (kill shelter) on a weekly basis and writing down descriptions of dogs/cats out there who needed homes and posting my hand written lists on Petcare’s bulletin board, in order to get the public to realize that there were good animals out there needing homes.” Animal Control, at that time, was not actively getting animal info out for the public knowledge. Over time Cindy became friends with the staff at Animal Control and they started working harder to inform the public about available animals.

Then one Saturday the office manager and Cindy loaded up a bunch of dogs, took them to a local feed store and did her first off-site adoption. And that was the beginning of Cindy’s very successful animal placement calling – over 20 years ago.

Cindy has no idea how many dogs and cats she has rescued and gotten placed in forever homes. “With just taking Animal Control cats to cat shows Jan (Miller) and I have placed 338 cats.” She and Jan started taking Animal Control cats to shows about 7-8 years ago when someone gave them money to pay an entry fee for a household pet. They decided to approach Animal Control since those animals are the ones who need the help the most..they have no other options. Cindy and Jan told them what we wanted to select a cat, groom and bathe it just like their show cats, enter the cat in the show and take it as an available pet. Animal Control gave them the authorization and that continued Cindy’s rescue calling on a new level.

“That first show the cat was adopted and we were THRILLED,” Cindy said. At the beginning she and Jan could only do one show a year..their home show in Springfield, IL. The next year she and Jan took four cats. “We did the same show prep..bathing, grooming, nails, ears, etc as our own cats,” according to Cindy. We entered the show and the cats were all adopted again. “We were on CLOUD NINE.”

As people heard about what Cindy and Jan were doing, some started donating to help with entry fees. After about 4-5 years, Cindy asked Animal Control about taking 3-4 cats to out-of town shows. After checking with the higher authorities they were given the ok to travel with the cats and adopt them also. Cindy was shown how to do the paperwork and she and Jan were set. “Now we make as many shows that allow HHPs as we can with the pound kitties. Our local show has REALLY grown..we now enter about 25 cats for the added exposure and we take out a total of usually 40 cats all together for adoption. We normally adopt out about 3/4ths of them.”

One kitty Cindy has placed stands out and became a heart kitty for her, she said. Carter was a B/W domestic shorthair who she and Jan took in the second grouping of cats. Even though he was a full grown male who was about 1-2 years old, he was very docile with his bath and he LOVED being on the judging table. He would head butt judges, kiss them and was a smoozing expert. Cindy and her friend Brenda couldn’t believe this cat. They decided to co-adopt him, he would live at Brenda’s house and Cindy would continue to show him and use him as a shelter Ambassador cat. When Carter got to Brenda’s house, he claimed her husband Darrell as his person. He followed him everywhere, watched TV with him, slept next to him in bed, waited for him at the door when he got home from work, etc. When he would be with Cindy at a show, he loved her but she could tell he was glad to be home with his Daddy. After a couple years of showing, Darrell asked when he got to stay at home. So that was Carter’s last year of showing and he was retired. He passed away in 2011 from a health issue and is terribly missed.

Besides cat shows Cindy also does Sangamon County Animal Control’s cat side of their Petfinder site. Her friend Diane takes the cats’ pictures and Cindy does the write ups. ‘I am out there most nights after work to get info and spend time with the cats to get to know their PURRsonalities,” Cindy said. She also posts links to these pages on Facebook, Pinterest and other places she finds. “All the exposure you can get helps..you never know who might know someone looking for a kitty,” she said.

Cindy feels strongly about individual involvement in animal rescue. She said, “Keep your support, both monetary and physical, at home with local shelters. Then you will know that donations are going towards what they are supposed to. Shelters can never have too many volunteers. Don’t avoid the kill shelters..they need the help the most to get their residents out and into homes. Avoiding going because you know they are a kill shelter will NOT help the problem at all!! Be part of the solution..go in and help with anything you can. Bathe animals, walk dogs, socialize cats, contact rescue groups for them, post flyers on animals, use the media to post, work off-site adoptions, hold adoption events at the facility, etc. They are all understaffed and they don’t have time to do the things that are not a necessity for the animals’ care. You have to remember you can’t save them all, but think of the difference in the lives of those that you do save.”

And Cindy Willoughby has done just that – saved lives of animals for years. She definitely deserves the Humanitarian Award.