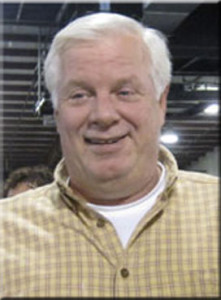 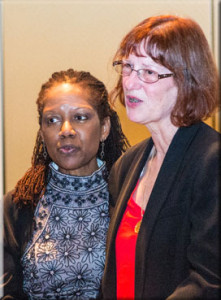 Terry Bierrie accepts the Humanitarian Award presented to her husband John for his tireless work benefitting felines and the cat fancy.

The humanitarian award is not an annual. The recipient of the Humanitarian award should be someone in the Midwest Region who goes above and beyond for the region, and/or CFA, for their breed or cats in general. Their contributions can be in veterinary medicine, research, legal arena, rescue, breed rescue, or someone who represents or promotes CFA and/or the region in a very positive light. This is NOT an annual award but rather a way to recognize a person that we can all benefit from knowing. The 2013 humanitarian award recipient demonstrated those traits and much, much more. This year’s winner contributions were not limited to CFA’s Midwest Region. This year’s winner’s contributions touched all of CFA and felines across the country and influenced improved feline welfare across the world. This recipient did much of his good work behind the scenes. So much of this work we may never know. But that was just his way.

The humanitarian award is given for broad efforts that benefit our felines and our feline communities. The Breeders assistance program and the Food Pantry are certainly such programs. Breeder assistant program was developed to assist owners of catteries who find themselves in difficult situations. As the program was being developed in the Midwest it was discovered that, occasionally, breeders might need help feeding their cats. To fulfill this need, donations of cat food were requested at cat shows — and the Food Pantry program was a result. This year’s recipient was the core of both programs making a difference in the lives of many cats in need. This recipients outreach efforts with the breeder assistant program has touched the lives of breeders and their cats and kittens across the country. Through breeders assist, as Chair, and the food pantry he had a hand in securing an unprecedented contribution from Royal Canin which will benefit cats in need for a very long time. This award winner recently decided to run for a CFA Board position. We can only imagine how significant his contributions would have been.

Our recipient could always be counted on to lend a hand to one in need, a smile or pat on the back to congratulate a fellow exhibitor, good council in difficult situations. One of my favorite conversations with this individual was a few months after the election. I was bemoaning something or other and he said, “Ma’am, just remember. “You” asked for this!”

The humanitarian award recognizes someone who we all benefitted from knowing.
Tonight, we recognize John Bierrie.