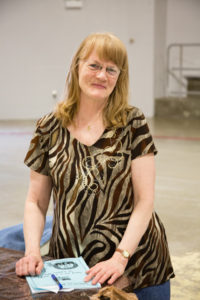 She is humble. Though she produces and exhibits beautiful Persians, groomed to perfection, she has no attitude of entitlement to wins. She is as delighted with the successes of her friends’ cats as she is with her own. She relishes time at shows with fellow exhibitors. She considers these people friends rather than competitors.

She is always willing to take a new exhibitor under her wing to be sure they learn and enjoy the show routine. Helping someone out is second nature to her.

She is very involved in local cat clubs, having served many terms in various officer roles. She is a treasure when it comes to show production. You know things will get done when they have been assigned to her. When asked to take on another task, she is willing and so very able.
Here is a person who is the epitome of an Ambassador. She always takes time to interact with spectators and shares her love of her cats with anyone interested. For local shows, she makes a point of inviting her kitten buyers to attend the show.

Diane Wagner is a great example of the best kind of CFA exhibitor. Tonight let us recognize Diane Wagner as our Rothman Award Winner