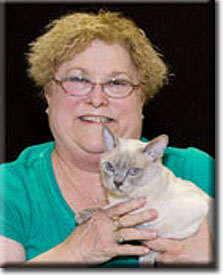 “Keep me searching for a Heart of Gold”, wrote Neil Young on his classic album, Harvest. Well, he wouldn’t need travel further than the Midwest Region to find it. Best Cassely, the 2006-2007 Midwest Region’s Spotlight Award winner may have the voice of terror when it comes to peoples’ wallets, but her tireless fund-raising accomplishments have enhanced CFA’s financial efforts regionally and nationally for many years. Although best known for her involvement in raffles, it does not end there. From selling candy bars to putting together the very useful “point book,” Beth has an instinct for raising funds and seemingly endless energy to find ways of helping the bottom line of clubs, her region, and CFA.

Besides Beth’s ongoing and significant fund-raising efforts, she has been involved with the support and advancement of the Midwest Region and CFA in many other ways. Beth has been a licensed ring clerk for many years and has been highly sought after by many a judge at several of CFA’s biggest shows. Since 1993, the regional club Midwest TGIF Fanciers has become one of the mainstays of Region 6, now producing three shows a year. Giving of her house, her time and organizational skills, Beth spearheaded the task of putting together the delegate bags for the last two Midwest Region-sponsored Annuals and has been doing the breed and the club sponsorships for the CFA International Show for over five years now.

With the cancellation of this year’s CFA International Show, Regions 4 and 6 are working together to produce the Great Lakes Region/Midwest Region Gala in Indianapolis on the traditional CFA International weekend. Beth is working closely with the two regional directors as one of the show managers. Currently working on some very unique ideas, Beth has come up with many ways to make this show an actual fund-raiser for the two regions.

Beth’s biggest impact on the MWR is the way she projects the importance of the region to other exhibitors. Always talking up what’s good for the region keeps that idea in the forefront of many exhibitors’ minds and gives them pause to consider what they might do to help Region 6. No matter how hard an individual such as Beth works and benefits the region in the present, the future must be considered as well. The example Beth sets is leading the way and setting the tone for continued involvement by others for the betterment of the MWR and CFA. Beth is dedicated to CFA. She continues to be a dynamic force, and by virtue of her regional and national cheerleading, is assuring a brighter financial future for the Midwest Region and CFA.

Beth’s career in the fancy started in 1985 with the purchase of a natural mink Tonkinese. The following year she got her second Tonk and showed her to a regional Best of Breed. That got her hooked. Beth has shown frequently and regularly since 1987, becoming a fixture on the campaign trail. From her first national breed win in 1995 with GC, BW, RW Purrtek’s Martini, DM, to her first national winner in 2002 with GC, BW, NW Purrtek’s Chianti, Beth has showed her heart out. Until “Chianti,” it seemed she was jinxed. In 1999, her cat ended up 26th. The next year with equal dedication to showing, she again came up one placement short of that coveted NW. Never daunted, she showed the determination that she is well known for in showing Chianti to CFA’s Fifth Best Cat in Championship, 2002. Seemingly to offset those two “26th place” finishes, she showed GC, BW, MW Lovn-paws Jack Daniels of Purrtek in 2004 to CFA’s 12th Best Cat in Championship and Beth’s second NW. Beth’s Purrtek Cattery has produced Tonkinese of distinction placing in the top three best of breed nationally for the past 11 years.

Yes, Beth has a heart of gold and perhaps a little Midas Touch to go along with it. Next time you hear that distinctive Texas drawl over the P.A. system asking for participation in a fund-raising effort, remember to open your heart and wallet and support the good causes Beth represents! Beth is one of the hardest workers in CFA and she truly does have a heart of gold.