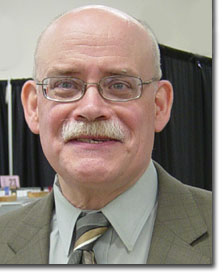 At the conclusion of every show season, each CFA Region and Division shall select one person residing within their Region or Division to be recognized as their “Cat Fancier of the Year.” The recipient of this award shall be someone with a minimum of seven years in the cat fancy who has given outstanding service to CFA in any capacity. Current or former CFA judges and current or former CFA Board Members are not eligible for this award.

If you see an exhibitor walking through the show hall with Prozac, Black Tar Opium, or Benadryl, you know it’s Mark McKenzie, CFA’s 2009 Midwest Region Spotlight Award winner. And, no, Mark doesn’t have drugs. He has Cornish Rex with drugs’ names.

Why would a breeder name a cat Prozac? The same reason he named his cattery INRxS. Mark is a registered pharmacist and has an impressive knowledge of drugs and felines. All his Cornish Rex kitties have “drug” names.

A successful breeder, exhibitor, mentor, club member, show manager, lover of cats, dogs, classic cars, music, photography and drugs, Mark is a friend to all, giving freely of his time, help and knowledge.

Mark and his wife Sharon will be celebrating their 35th Wedding Anniversary this August. They started their love for exhibiting by showing Italian greyhounds for five years. And true to their nature, they still show dogs for friends when help is needed.

But it was Mark’s dream to breed cats and he loved and still loves the Cornish Rex, so Mark and Sharon purchased their first pedigreed cat – a Cornish Rex – 20 years ago from Nancy Dodd, who also helped them with their breeding program. Mark’s mentor was Faye Mullins, who taught Mark about the Cornish Rex and breeding. Now Mark has become the mentor to many. This year he and Sharon gave a Cornish Rex to a couple to show and guided them to a regional win in another region.