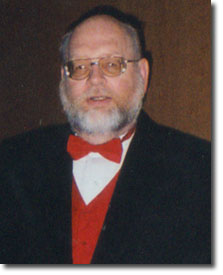 Monte used to show Cardigan Welsh Corgis, but when he obtained an already-bred Himalayan from his wife’s co-worker to be queened out and kittens raised, he discovered that cats were the place to be, not dogs. That was back in 1987, and in 1988 he and his wife obtained thier first Chartreux cat, “Blaukatzen’s Dinah”, whom he called Moushka. They took her to her first cat show, Lincoln States, in February 1989, and she got her winners ribbons. After that, she didn’t get anything (probably because she had a slight kink in her tail).

Rather than give up, he got another cat from the same breeder, “Horatio”. He made a couple of finals as a kitten, so he was hooked, and kept showing Horatio to try to grand him. That took 6 years. As a matter of fact, he made his first and second final at the same show a year apart in Minneapolis, MN. (Did I say Monte is a persistent person?). His wife acquired three other cats from Jerry Auerbach, Excaliber (the gay cat), Fleur-de-Lis, and Godiva. I say gay because you could put Excaliber in a room with other whole males and a female in heat, and none of the males would challenge or have anything to do with him – he also never showed any interest in any female cat.

Robin and he (Monte, not Excaliber) obtained a cattery name (Jouvencebleu), and continued to show Horatio while actually doing some research on quality Chartreux cats, and eventually obtained a cat with an excellent pedigree behind it. That led to their first Grand Champion, Janvier’s Nina of Jouvencebleu, who granded just about the same time Horatio did. You can tell how long that took, because Chartreux names start with a new letter every year, so other than the fact that the breed skips the letter K (he doesn’t know why), between H and N are 5 years.

After Nina came Nautica and Oriana, their first two Regional Winners. Since then, from the cats of Jouvencebleu that have been shown or bred come 17 Regional Winners, two National Winners, including the first-ever Chartreux National winning kitten, seven National Breed winners, and one Distinguished Merit cat.

In 1993, Monte attended a clerking school and started clerking. In his first clerking assist, which was the Regional Qualifier show when you actually had to attend to qualify for the CFA International show, he made a complete idiot of himself – he got on the microphone and called for longhair kitchens 1 through 16 to ring 3, and then started laughing. Hopefully, he hasn’t made too many microphone mistakes since. He went on through the program, and then into the Master Clerking program, eventually becoming a regular Master Clerk at the CFA International Show.

The CFA International is normally done using two Master Clerks, but at the first San Mateo show, the other Master Clerk was unable to attend due to a death in the family. As a result, Monte went ahead and Master Clerked the show by himself – resulting in a record high assignment, 823 cats. In another unusual ploy, when three judging rings were held in a room off of the side of the main benching area and the other two judges had finished their assignment, Monte combined all three rings so that Bob Molino could do a one-part Premiership final with 14 males.

Over the course of his clerking career, Monte has probably clerked at least once for most of the judges currently licensed. He has done Master Clerking assignments in just about every region, including Southwest, Great Lakes, Gulf Shore, and of course, the Midwest, where he clerks many of the shows in the region. As an aside, his goal is to always check out every judge within 10 minutes of receipt of the last final from that judge.